It was the best stand up gig I’d done all year… because it was the only stand up gig I’d done all year.  I returned to Rabbit in the Headlights, Brighton’s longest running new act night, for a special anniversary. It had been TEN YEARS since I did my first stand-up set at that very gig. But I’d only done two in the last two years. Would I remember any of my set? Would I die on my arse?

I don’t know if I can say I spent a decade in the comedy biz, maybe a decade near it. I probably only managed to do five years of proper gigging before I stopped to spend more time looking after my parents. I returned for a year to prepare and perform my Edinburgh show in 2014 but then had to stop again.

I always try and do Rabbits in November no matter what level of gigging I am at. This time I was very rusty.  As usual, I forgot the mind-numbing terror involved in doing comedy. It comes in stages. A thoughtless booking of the gig: “Oh that will be fun”. A vague nervousness: “I should think about what I’m doing for that gig next week”. Stark realisation: “Oh my god. I’ve got to do a gig tonight. What if no one laughs? What if I forget everything? Why on Earth did I decide to put myself through this again?”

It’s easier if you gig all the time as it all becomes very familiar and the nerves diminish. It was not familiar to me. I wanted to try writing new material, but as the gig grew nearer, I realised it wasn’t practical. Being rusty, it was best to stick to the old stuff I knew well to give myself any chance of success. 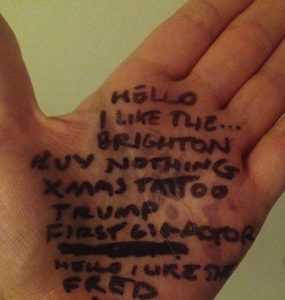 The first part is made of bits and pieces of old sets that are either topical or can be dropped in anywhere. “Trump” and “First gig / actor” were new bits that had occurred by accident as I had been practicing. All of this should be about five minutes. “Fred” basically meant my entire first five minutes set that I did at that first ever stand-up show.

I spent most of the day of the gig worrying and trying to go through my set in my head, testing the new bits, wondering if they were worth it. At the end of the day, I went home and ate quickly, then set off.

When I first did Rabbits... it was at the The Malborough Theatre, then it moved to The 3 and 10, then the Basement. Now, it was residing at the Marwood Café, which I only ever been to once to meet friends downstairs for tea.

I went in and was directed upstairs where two rooms were joined by a large folding partition door. It sort of gave the impression of a small theatre. But with bench seating around the stage. In the other room the chairs were formed in rows. There was a microphone. There were lights. It was a good set up!

The other half-a-dozen acts were milling around in the “stage” room before the doors opened. I chatted to a couple of people I knew who are still doing comedy and Rob, who was compering the gig and kindly booked me onto it. I was very much: “Ooh. I don’t know about this comedy lark anymore”. The doors opened and we got a decent audience of 15 to 20. The comics left the “stage” area and sat in the rows of chairs. Rob loitered in the “wings”. I sat in the audience and tried to remember my “jokes”.

Rob was doing similar Christmas schtick to last year, handing out Christmas-flavoured crisps, liquor chocolates etc. It was all good fun and got the audience in a good mood.

I was on second. I did the “Ray” intro bit which I always mean not to but it gets the audience going so I end up doing it. I got through the older bits and pieces as intro which went okay, and the newer stuff that was definitely more “ideas” than “jokes” but the crowd let it slide.

So far it had all been going okay. The audience seemed warm to me. There had been laughter. I had adlibbed around any stumbles. It didn’t feel as slick as last year. I knew I was adding in a lot of unintended “erm”s and “you know”s. Then I got into the old set and it suddenly became like clockwork. No stammering or flubbing. Much cleaner lines and proper pauses for people to react. I did the old set with Fred and then a bit about being shy and then the coffee shop bit with the callback.

I’d been on stage for some time by this point and it felt like the natural end. But I was enjoying myself quite a lot and asked Rob offstage if I had time to do anymore? He responded by dangling a cuddly Santa* playing the saxophone from the “wings”. So I said, “Right. I’m going then” and added “Goodbye forever!”

The advantage of going on early is that I then got to sit and watch the rest of the show without worrying about my bit anymore.

I was pleased. It went okay! Unfortunately.

I say that because now I have re-awoken the love of doing it. I like coming up with ideas, and trying to get them to work. I like performing and working the audience when bits don’t land or whatever. Of course this is always the feeling after a nice gig. If I had died I would now be cursing stand-up and be glad to count myself out of it. But unfortunately I may have gotten the itch to do it again.

If I did start again it would have to be just for the enjoyment of it. I don’t see any hope of doing it professionally anymore. It would just be the odd gig around Brighton. Will I do stand-up again? Is it worth the work and emotional strain? Or will that really be my final gig after ten years? Is it “Goodbye forever”? If so I will have ended with an obscure reference to Daniel Kitsons mailing list sign-off. Which seems appropriate.

*It may have been a Santa, or a reindeer. Or a bear? I can’t really remember now. If anyone knows please add a comment to say what an Earth it was!