It’s Wednesday! I’d been looking forward to this day for ages. Even my increasing tiredness couldn’t bring me down, because I had three separate awesome, brilliant, amazing things booked in to do.

The first was to go and see Kitson’s theatre show “It’s always right now, until it’s later.” The second was to go to a Michelin starred restaurant for lunch with Kerry. The third was to go and see Stewart Lee’s Silver Stewbilee at the Festival Theatre – an event marking his 23 years in comedy and the launch of his new book.

I get up early, get the bus to the other side of town and queue for Kitson’s theatre show.

I have to admire Kitson’s stubborn bloody brilliance. When I first got the festival brochure through in the post I knew he’d make it difficult to find whatever it was he was doing. Was he in the Comedy Section? No. He was in Theatre. Was he under D for Daniel or K for Kitson? No. He was under I for “It’s always right now, until it’s later”. Was there a little picture of him next to the text? No. There was a riddle to be solved and a maths equation to be balanced, the answers to which had to be decoded and tattooed on your right arm to guarantee entry.

Well, alright. There was a little Traverse Theatre symbol. But the point is he wants the people who come to see him to be informed, intelligent people who are prepared to make the effort.

Is this perhaps a bit elitist? A bit snobbish. No. Because it is Kitson. And he is brilliant. Shush.

As part of the test set for those who wished to see him, Kitson has decided to do his show in the morning. So I get up early and queue and just before ten in the morning, we are allowed into the Traverse 1.

I’m not sure I’ve been to a proper theatre much, or at all. But I am struck by the simple beautiful set: the long black curtains reaching up seemingly forever, the stage floor so black it reflects mirror images of the wooden stepladder and chair on stage. And the lightbulbs.

All across the stage large round naked light bulbs hang from copper wire descending from somewhere in the air. When Kitson arrives on stage and congratulates us for being up so early, the houselights dim to a spotlight on him. Then this spotlight gradually dims and he is illuminated only by the glow of dozens of thick spiral filaments, burning orange inside each naked bulb.

I won’t go into the story here in case you get a chance to catch it for yourself. But it goes without saying that it is a work of heart-warming heartbreaking brilliant bloody genius.

After this I go to the Fringe Centre and meet my girlfriend. We get a taxi out through Leith to The Kitchen: “The Restaurant opened in 2006 by husband and wife team Tom & Michaela Kitchin on Edinburgh’s stylish waterfront.” http://www.thekitchin.com/kitchin/home

We have the most amazing lunch with a specially chosen wine to match each course. It’s all incredibly opulent and decadent to me, a poor simple boy from the Portsmouth dockyards. (I did work experience in the Dockyard photocopying room once.) We finish the meal and I am content and full. I feel like an emperor. A fat emperor. A fat emperor in need of an ermine snooze.

We go back to the Halls and I nap for thirty minutes before 3D Comedy. Rob is back on compering duties. I ask to go on first because I feel it is my turn to do it and I can then relax and watch the end of the show.

There are a couple in who are very… ‘vocal’. They join in on everything, offering their thoughts and opinions, and, in a friendly way, completely disrupt the flow of the gags and ruin everything we are trying to achieve.

I can’t turn on them and destroy them with pithy putdowns because it’s a free show, they’re nice people, and it’s not the sort of thing I do. So I try other tactics to shut them up such as sighing and visibly addressing my set to the other side of the audience. Which gets a laugh. The whole thing’s sort of fun. But it’s a battle.

The couple calm down over the course of the show and it all works out okay. Then there’s time for a quick drink and I am off to the Stewart Lee thing. Again, it’s amaaaaaaaazing! I’m running out of superlatives, here.

Kevin Eldon was on as his poet character. Amazing. Stewart Lee did some old stuff. Brilliant. Paul Putner did a character act as a hack American comic that most of the audience didn’t understand. Fantastico! Simon Munnery as Alan Parker, Urban Warrior. Yes, please! Bridget Christie as an Ant. Wow! Richard Herring storming the stage, ripping up Stewart Lee’s book and throwing it in his face. Super! Some new stuff from Stewart Lee. Super Brilliant! Kevin Eldon again. Yay! Mr Eldon is doing a song supported by the band… Franz Ferdinand. Unexpectedly yes! And finally, The Frank Chickens. YES! I hope they win Comedy God.

It was a brilliant, brilliant line up.

Afterwards Stewart Lee was doing a book signing. I get two: one for me, one for my girlfriend. I cheekily ask Stewart Lee to sign the one to my girlfriend with, “Yes, I will do your small charity night in Brighton”.

So look out for him at Charity Chuckle soon.

After all this excitement, I have an open spot. And being a bit high on the excellent shows, the contractually binding book signing, and the combative 3D Comedy earlier in the day, I am a bit hyper and shouty and nail my five minutes at the Meadow Bar. Hell yeah!

If in doubt, shout.

I walk on to the Library bar to give Kerry her book and annoy people by telling them what a great day I have had.

I knew this day would be awesome. And it bloody well bloody was. 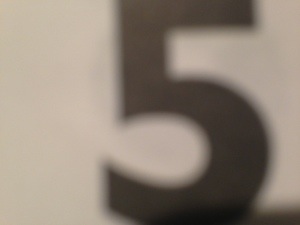