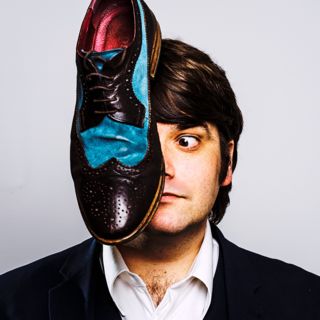 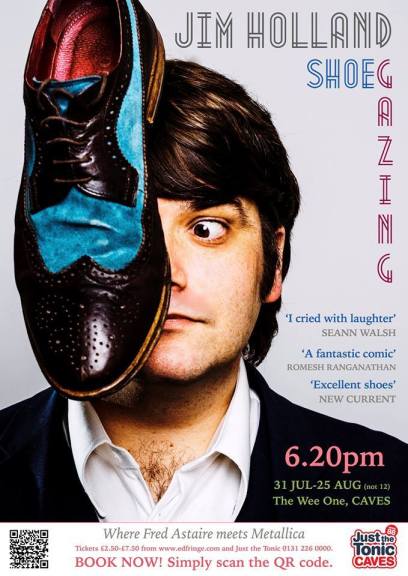 “Jim Holland is a sweetly diffident bloke in a three-piece suit and snazzy shoes. Jim loves his shoes. He is a man of strange and unexpected passions and it is this, and his slightly awkward, shy persona that lends this show its charm… genuine charm is in short supply on the increasingly industrialised comedy scene.

“Jim loves ten pin bowling and abhors ironic spat wearers; he bemoans modern man’s limited sartorial options, learned all he knows about love from Fred Astaire and has been described by an ex as “high maintenance”.

“But then five minutes later he reveals himself as a metalhead who has gone through an acid jazz phase and explains why David Bowie’s Tin Machine is like a sausage roll.

“The genuine nerdiness and the vulnerability are very watchable and you can feel the audience warming to this man who has lived life far outside of the group of “cool kids”.

“I left smiling about the “shoegazing bands” of the 1990s and humming a tune by The Lighthouse Family.”

“Anything an extrovert can do, an introvert can do more awkwardly.’ That’s the mantra of Jim Holland, Portsmouth-born shy guy. He also believes that real integrity is persevering with a thing you love, even if no one else will like it. He drops in this last pearl of gauche wisdom as an in-joke, a wink to his charmed crowd who he knows he’s definitely got onside with his nervous, blinky delivery…

“His material in Shoegazing hangs loosely around his sartorial dilemmas (growing up, he had aspirations to be dapper like Fred Astaire, then an acid jazz fan, then a metalhead), and his brief love of shoegaze music which, like him, was ‘mopey, teenage, introspective and non-confrontational’. There are lots of Slowdive / Ride / Kevin Shields references in there for fellow shoegazers, as well as Tin Machine appreciation and Lighthouse Family revulsion…

“His shyness is nice, to quote another man he no doubt listened to during the Fred and Gingeryears of his youth. The hour is an entertaining, awkward shuffle around his quirks.”

How do you stand out from the crowd and yet not been seen? With his intelligent wit and conversational delivery, Jim’s debut show, Shoegazing, is about how an intovert outsider deals with love, life and wearing two-tone shoes. “Jim is a fantastic comic who has a wonderfully distinctive comic voice. Everyone should go and check him out” Romesh Ranganathan “I cried with laughter” Seann Walsh “Very funny…an assured performance, even working some friendly heckling” Latest 7  “Excellent shoes” New Current

Choose Your Own Edventure 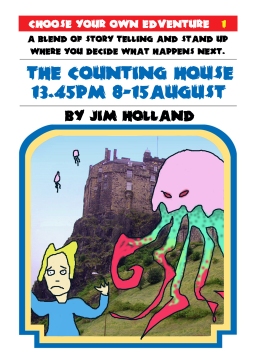 Jim took a half hour storytelling show to the Edinburgh Fringe in 2009: Choose Your Own Edventure. In an Edinburgh over-run by aliens and vampires, the audience got to choose which path the show would take before being brought to task by the very character they were contolling. “Jim Holland has created something delectably quirky and inventive. Choose Your Own Edventure is wacky, silly and just a little bit ridiculous, with a clever twist ending… This piece stands out as being an excellent concept, and the story-telling is strong and interesting. Holland is a wonderful story-teller, and his stand-up comedy background makes his delivery quick and insightful.” See the full review.

Jim won a competition by QueenSpark Books to be one of a dozen writers to work on this Graphic Novel about the history and people of Brighton. He wrote the opening story, Seawater, about a fisherman in 18th Century Brighthelmstone and collaborated with artist, Chris Hagan, to produce the final work. Lots more pictures on Chris’ blog here. “I was transfixed by Seawater, from Jim Holland and Chris Hagan… A maritime epic of unrequited love, hard toil and the power of the sea.” APlaceToHangYourCape.com “Brighton: The Graphic Novel has such a fresh feel” The Argus “Brighton: The Graphic Novel uses the history of one of Britain’s most celebrated cities as its starting point. The result is a startlingly original and fascinating publication spanning more than 300 years from the 1700s to the present day.” Brighton and Hove Independant Get your copy here.    This Blog. What’s all that about? The blog will comprise of entries of 1000 words or less with at least one photo on various subjects and in various styles. It is an experiment to keep learning about writing and photography. More rules may be added later.