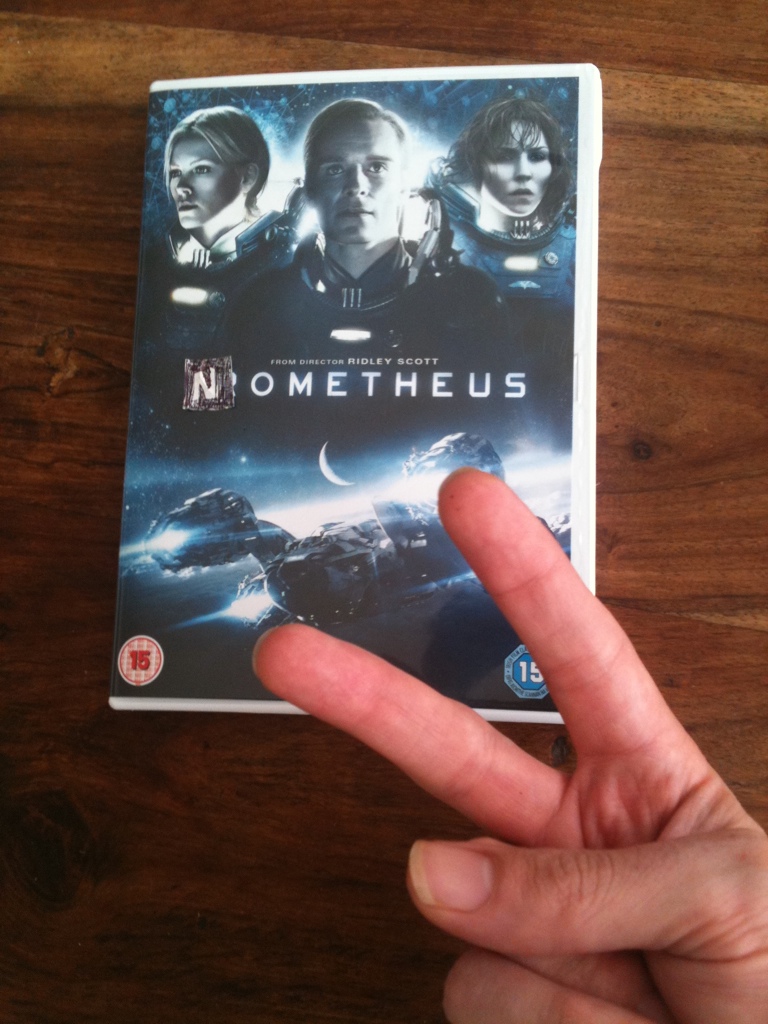 I saw Prometheus at the cinema. Remember all the hype beforehand? Remember how the trailer had all these cool nods to Alien including the slow line-by-line appearance of the title? And the mysterious new elements like the giant head? (The giant head didn’t give a giant nod though.) I was pretty excited about seeing it.

But by the time I left the cinema, all I felt was “Meh”. Prometheus looked beautiful but the basic storytelling elements of plot and character were screwed. The “high concept” was the old “aliens created us” schtick that Erich von Däniken was peddling in the Sixties with Chariots of the Gods. I didn’t know who the main character was supposed to be. Who was I meant to support? Who were these people? What did they want? Why did new people appear in the film half way through? Was just in order to get wiped out? Was there an endless number of cannon fodder on the ship?

Why did everyone seem to be obnoxious-and-stupid or dippy-and-stupid or stupid-and-stupid? Why did the surviving crew suddenly turn from grease monkeys to self sacrificing heroes? Why can’t people run sideways a bit? It just got more and more confused as it went along.

In fact, despite the content, it’s the opposite film to Alien.

In Alien we meet a small band of characters who we grow to like but one turns traitor. They encounter a mystery which becomes clearer and more dangerous.

In Prometheus we meet a traitor, but to who or why is unclear, then a whole bunch of characters who we grow to realise are either unknown to us or actively dislikable. They deliberately look for a mystery which becomes progressively more mysterious/annoying/ill-thought-out.

My initial “Meh” hardened in the days after I left the cinema to a “Grr”.

Then I read a couple of interesting pieces on the web. One was about the persistent image of self sacrifice in the film and the fact it is set at Christmas and mentions of “2000 years ago” inferred that Jesus was an “engineer” (or “big’un” as I refer to them). Which doesn’t quite work as the film is set in 2800 or 2900 or whatever. And the other was that it was trying to set Alien and Blade Runner in the same universe. Which I felt interesting but ultimately pointless and annoying. I mean… Why? Luckily that appears not to be the case.

But it was enough to make me think that their was something interesting underlying the film.

But that was before I watched the DVD…

One Reply to ““No”-metheus: Why I hate Prometheus part one”