We crammed a lot into the first day even though I spent most of it feeling very tired indeed. I woke at 5 in the morning after a late night of packing. Kerry and I jumped into a taxi, got on the train and stared blearily at the other commuters in their suits and ties. I wondered how they did this every day. Then it was: airport, plane, bus! And in a mere matter of several hours, we were there.

It was about 11am and already the streets were bustling with festival-goers. We dropped off our luggage at the accommodation office and I tweeted to say we had arrived – what should we do next? The Twitterverse responded immediately. Keiron Nicholson tweeted a couple of ‘tattie’ shops for breakfast. Angela Barnes tweeted to say her free show was on at 1.45 at the Rush Bar in Cowgate. Aidan Goatley tweeted ‘Huzzah!’

We took a quick look at Edinburgh Castle. Neither Kerry nor I were doing a show this year and I was looking forward to being a tourist. I thoroughly enjoyed walking down the Mile without even thinking of flyering. I did take pity on the poor sods having to do it, though, and politely took every flyer I was offered. Then threw them in the nearest bin.

We went to the Mitre bar and started drinking. This was great! No show to worry about, no flyering, no need to stay sober…

Aidan rang and offered us a gig.

The gig wasn’t until 11.30 that night and I was already tired. Aidan came to meet us at the pub and we had a bit of a chat about how well his show was going. I offered to flyer for him. Aidan looked pleased. I explained I wanted a handful of flyers to avoid being flyered myself. He seemed less pleased.

The three of us walked down to Cowgate and found the Rush Bar. It was a small “pre-club” bar and had a slightly disused feeling in the middle of the afternoon. Also, the microphone wasn’t working.

Despite this, Angela compered with gusto and her guests were great, including her fellow BBC New Comedy finalist, Nish Kumar, the fantastic Paul Sweeney, and Grainee Maguire who, impressively, did a lot of topical stuff about American debt and London riots.

Back at the accommodation office, we pick up our keys and saw Jenny Éclair doing the same. Our first celebrity sighting! She asked Kerry to tell the man waiting for her outside that “Jenny was being seen to”. Kerry happily obliged.

After dumping our stuff at the flat, we went to see Dare to Dream in the Pleasance Courtyard “Beside” venue. Entering the darkened room, we were submerged in smoke and blasted by rock music as we peered about for a seat. The place was packed. Kerry spied a couple of seats at the back and we clambered over the front three rows of people to get at them.

I would be very relieved we had avoided the front row.

The lights dimmed further and a silhouetted figure appeared onstage to more rock music and a chant of “Helm! Helm! Helm! Helm!” In the darkness we could just make out the figure of a man with his arms aloft and lights studded across his belly spelling “H E L M”.

It was Nick Helm.

The show was similar to last year, a fantastic full-on hour of audience interaction, songs and humorous mental breakdown. One guy in the front row was forced to lie down on stage for most of the gig. Another had Nick shouting “Dickhead!” in his face for five minutes. There but for the grace of god…

Afterwards, we went for a beer in the Pleasance Courtyard and bumped into David Trent who is headlining the next Charity Chuckle. Then, after stocking up on haggis flavoured crisps and pot porridge (like a pot noodle but with… porridge) we got a taxi to the Rat Pack in Princes Street to see Mae Martin. She does very lovely comedy songs, quite often based on Alanis Morissette with charming rambling stand up in between.

Next was Aidan’s show, 10 Films With My Dad, over the road at Ryan’s Bar. I saw the first preview of the show and it has come on leaps and bounds. The stand up is tighter and the short films we helped with have been trimmed down. Both the Aliens homage featuring Kerry’s Ripley and the Die Hard bit with my impression of Alan Rickman have hit the cutting room floor.

This is surely a case of throwing the baby out with the bathwater.

When he wins an Edinburgh Award, I am still going to insist that it was due to me. Because of my name in the credits under “additional help” or something. God knows how but I’ll find a way.

Anyway, Aidan’s show is great. A properly rounded hour of comedy with a theme, emotional connection, proper jokes… Kudos to him. I hope he gets good reviews, awards, etc

Of course it’s all down to me really.

Once the show had finished, we walked down to the Grassmarket and found a cafe to sit in for an hour before we did our open spots. I was looking forward to doing an impromptu gig on our first day in Edinburgh. I was completely exhausted and wanted to go home. But a coffee, half a ham and cheese toastie and my adoring public were all I needed to…

The gig was cancelled. Not enough people had turned up for the show. Good old Edinburgh.

Kerry and I walked back to the Mile with Sean McLoughlin, who recommended we see Hannibal Burress.

Then walked back to our place at West Nicholson Street and finally got some rest. We had done a lot already. What might tomorrow hold?

Mainly, I was looking forward to trying the Pot Porridge. 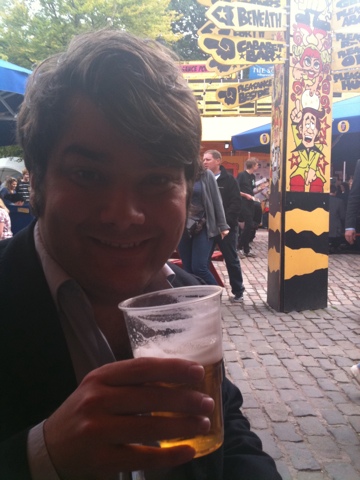